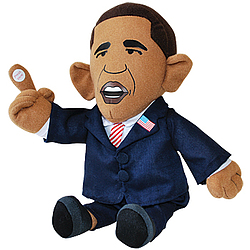 After voicing just about everything from talking alarm clocks to voice mail menus, cartoons and a whole host of other venues, Val has finally broken “the toy barrier”!

“Big Mouth Toys” from Connecticut hired Val Anderson to provide the President Obama voice impersonation for their new toy over the winter of 2011.

After undergoing development in the fall, the toy called, “The Pootin’ Tootin’ President Doll” was then manufactured overseas and released late November. The talking president simile is now widely available through many novelty catalogues both in print and online, and is also available in many commercial storefront venues, as well.

Bigmouth Toys, Inc. reports the doll is now being widely sold and is quickly becoming one of their best sellers!

The doll has 21 non-partisan lines from what must seem to be worst case of an executive crepitation attack in presidential history as he passes noxious vapor sounds followed by a clever line with a voice that has an uncanny resemblance to our President himself!

Val also helped to develop this toy by writing a number of the lines delivered by the talking Obama doll, and has gone on to voice other talking toys currently in development for later release.