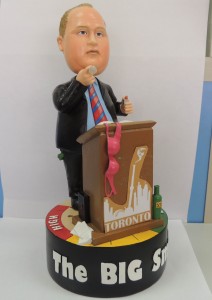 Having voiced 5 toys to date, Val was contacted by the staff in Toronto to audition for a voice impersonation of Mayor Ford’s voice in a realistic, yet fun way. The challenge was on!

Holding a crack-pipe in his right hand, and a lighter in his left, this novelty will be a scream when it hits the streets in Toronto! A lot of work went into the “Mayor Rob Ford Talking Bobble-Head Doll” on the part of those who helped to design and produce the Rob Ford talking figure, namely Joyce Crawford, who basically produced the projesc in Montreal.